I’m the one that starts running/ and breaks an old woman’s leg with a bar/ and steals her wallet/ At the same time I’m the old lady/ And obviously, the wallet too.

Frank, poet and musician in Bogotana[mente] by A. Costamagna

“There’s no specific climate nor a sky upon Bogotá. Or maybe there is one, but plural; twenty climates, twenty skies, twenty daily landscapes. Heaven and Hell for photographers […]. Bogotá people often refer to their fellow citizens from towns below the altitude of 1500 meters as “calentanos”: people from warm grounds, […]. In Bogotá, on the contrary, it is never hot. The sun comes and goes: it cheers, kisses, and so long. /Then there’s the crack of thunder and the sky seems to burn and rays strike the clouds and rain comes. […] And the sun again, cheering, kissing, and so long.”

from Bogotana[mente] by A. Costamagna 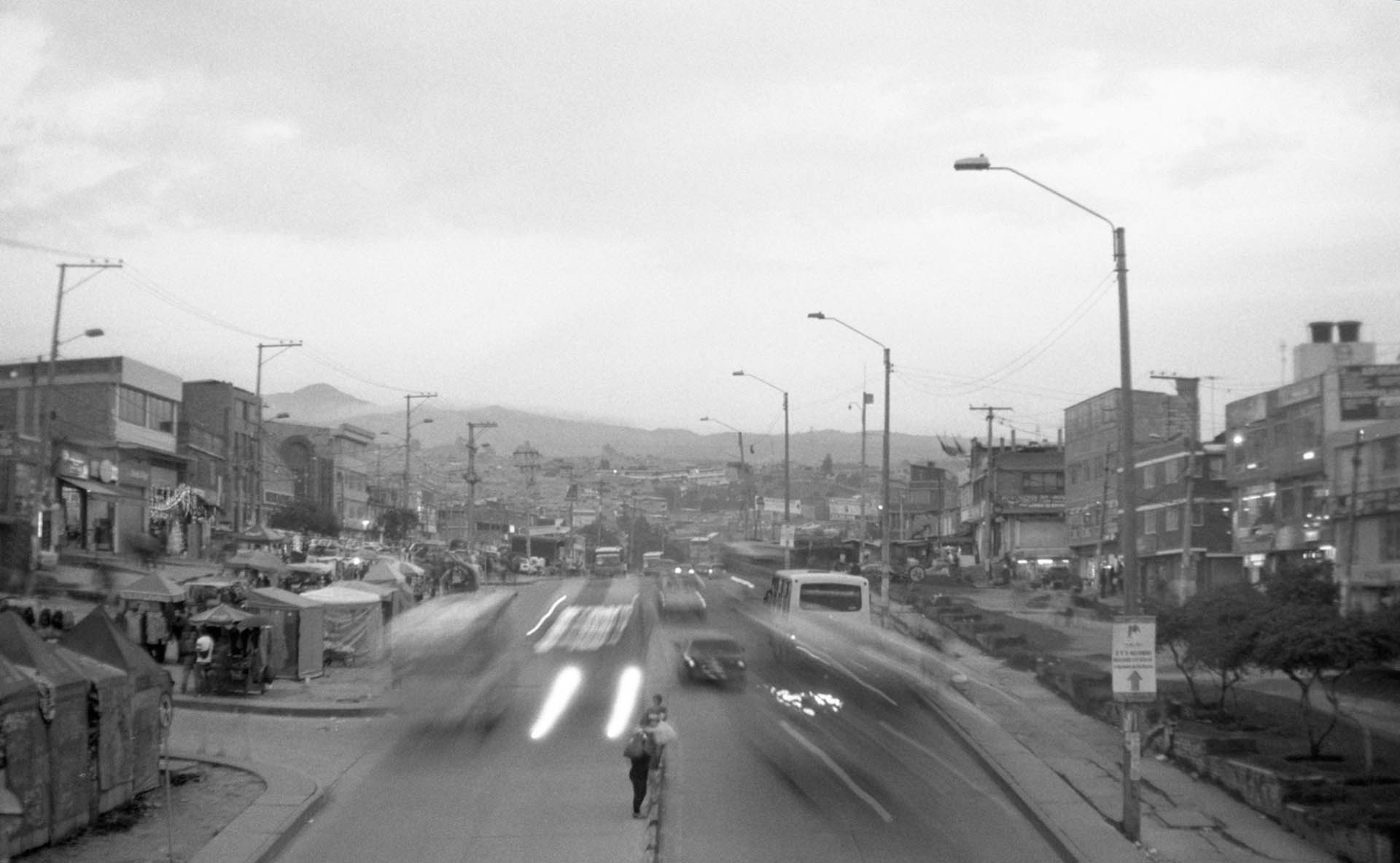 Bogotá, nine million inhabitants.
The most impressive thing is its sound, explosive if compared to all the other territories passed by the VideoRitratti project.
The need to build a narrative is the motor of all the investigation.
Every street, square, neighborhood, corner, every person could belong to any place.
What binds everything is the common background of the portrait.
The camera steps back a little more.
Here more than anywhere else every portrait is the opportunity to challenge all previous assumptions..
The metropolis, its unrestful and ever-changing life, “broke the frame” every single time.
The stopping of every subject becomes an act of presence and resistance, through corporeality and gaze.
There’s no portrait in which the city stops behind.
Sound is an ensemble of ten, a hundred different sounds.
Sirens, engines, announcements, murmur, chants, bells, cries.
Sound, this time, becomes the motor that builds the narrative, the off-camera.
The intention is to describe this place, a crossroads of many other places and many stories, through a collective portrait, a call for posing, for watching ourselves in a time when everything is fleeting, in a city where staring in the eyes instead of watching your back is tiring.
Besides, the subject of the portrait often decides to break the picture, reveal the interaction.
Someone had the need to sing, some to recite a poem, a rap about life on the streets, someone chooses to stare into the camera, but keeping on with what he was doing before making eye contact.

VideoPortraits from Bogotá took its final form in a twenty-two minutes short movie titled Mamihlapinatapai – People from Bogotá, a mosaic of faces that stop their rush for a brief moment. A moment that lasts the time of the Portrait, and in which everyone acts their own way of looking. An invitation to the body, to look at each other, to observe in order to find every nuance in a gaze. It is the portrait of a metropolis, where stopping to have a look is a revolutionary act: a temporary suspension of the unstoppable flow of time; a reminder that calls on the people to take their time to observe and pay attention to the other.

“Mamihlapinatapai” is an indigenous word that describes the act of mutual staring in the eye, hoping that the other may do something that both strongly desire, but no one wants to do first.

A short movie that reflecs upon the act of mutual, intense staring in the eyes, that choses the strength of a still body inside an endless motion, to take the viewer in a full immersion inside the city, its sounds and its movements, and to leave behind traces of a bigger story: “from individual cross-sections emerge philosophical spaces about time and movement, as if telling not only about Colombia, but the whole South American continent, ever suspended between action, revolt and a slow progression, a permanent wait” (A. Renda). 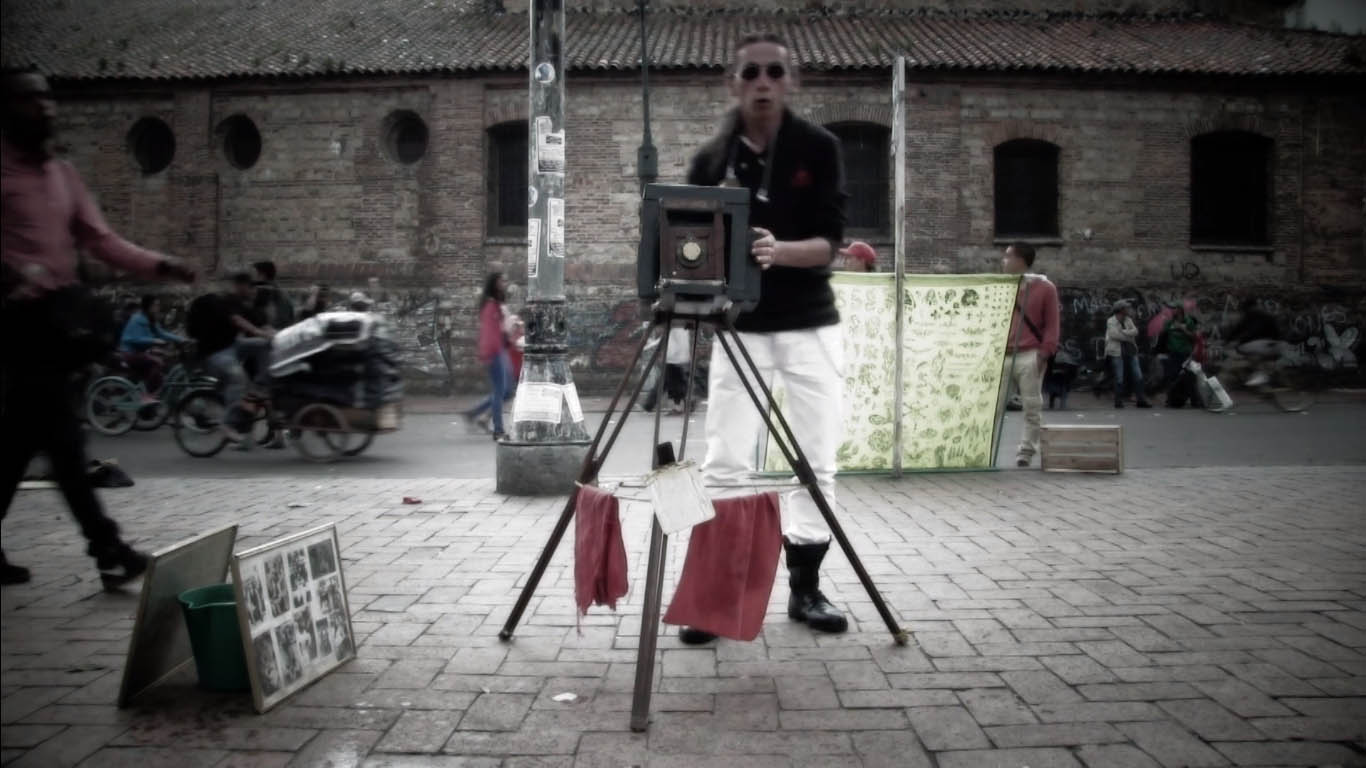 “Me regalas un minuto por favor?”
“Can you give me a minute, please?”

Everything moves unceasing, stopping it seems to be difficult.

Move, move, says the old, forgotten book
Come on move, move, it says once more,
anew, with a pen, with a brush
which carves as does a chisel.
Today I will leave, today I will be quiet
So that the world might teach me
Rather than I teach the world
Because if I talk too much
My words are lost on the wind.
Better I be quiet
So that wisdom may come
And if there be wisdom
thence understanding may appear
and fall silent
before innocence.